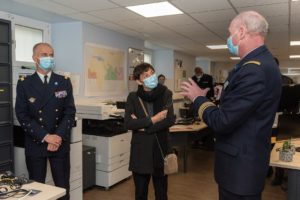 The Minister’s passage in Brest enabled her to visit the MICA Center.  The missions and workings of the centre were presented during the morning.

The relations between the maritime industry and the French Navy, through the Coopération Navale Volontaire (CNV) were first described.

International cooperation, with examples such as the European Union’s anti-piracy mission “ATALANTA” and bilateral Franco-British cooperation in the Gulf of Guinea, was then presented.

The discussions provided an opportunity to discuss the issues involved in protecting French maritime interests around the world, as well as the impact of piracy and maritime robbery on world trade.

In the afternoon of this commemorative day, the Minister and the Admiral went to the Cenotaph of Sailors Who Died for France at Pointe Saint-Mathieu (Finistère) to pay tribute to the generations of seafarers who gave their lives to the nation.