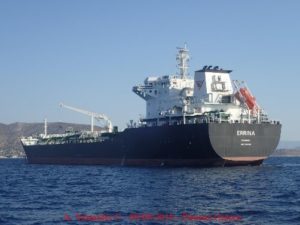 On October 22, 2020 at 07h58Z, while sailing in international waters in the Gulf of Guinea, tanker ERRINA issued an SSAS warning and its crewmembers locked themselves in the ship’s citadel. Starting then, all attempts to contact the ship failed. The Italian Multi-Missions Frigate NAVE FEDERICO MARTINENGO reached the position given by the MDAT-GoG in the afternoon and searched the area using its helicopter to no avail.

In the evening, the shipowner informed the MDAT-GoG of the last known position of ERRINA before the SSAS warning signal. The participants in the search were then reoriented toward that position. On October 23, 2020 at 08h00Z, the helicopter of the Italian Frigate established VHF communications with the tanker. The ship’s captain testified to a boarding by six pirates but all crew was safe and accounted for. A ship armed with a security team from the Nigerian Navy then escorted the tanker.