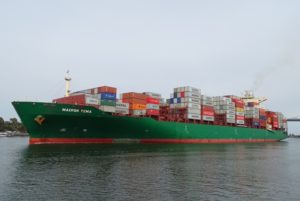 Immediately, 17 of the 21 crew members retreated in the citadel (a secret and secured stronghold on the ship), enabling them to escape from capture. The captain and three crew members staid on the bridge to make deflection maneuvers, like zigzags, with the aim to prevent the boarding. Despite these maneuvers, the pirates finally boarded the container ship. The team that had remained on the bridge and the captain quickly joined the citadel.

From this secured space, the captain immediately alerted the MDAT-GoG (Maritime Domain Awareness for Trade – Gulf of Guinea) housed within the maritime security expertise centre MICA (Maritime Information, Cooperation and Awareness) Center. The company Security Officer (CSO) is also warned, as have been the different actors of the Yaounde process, who act for the benefit of maritime security in the Gulf of Guinea. The actions taken by the MICA Center enabled the departure of the Portuguese patrol boat Zaïre on call in Sao Tome while the shipowners’s crisis cell charged the Nigerian security ship Teach to join the scene.

On the morning of the 15th of February, the security team of the Teach boarded the container ship. No pirate was then seen on board and the crew of the Maersk Tema was authorized to leave the citadel. The Teach subsequently escorted the container ship to Lagos.

“The captain of the Maersk Tema had the right reflex to immediately alert the MDAT GoG, in the MICA Center”, declares lieutenant commander Gilles Chehab, commanding officer of this world dedicated French Navy expertise center, located in Brest. “His action allowed all regional actors to mobilize and take measures to stop the threat. It shows once more that the counter piracy fight through the inter-regional cooperation keeps strengthening and the importance of a quick sharing and spreading of the information, as done by the MICA Center. The annual report on piracy published last January doesn’t tell anything else : the Gulf of Guinea remains a risky area but with a permanent and strict watch, sometimes combined with an action, we can stem the growth of piracy acts.”