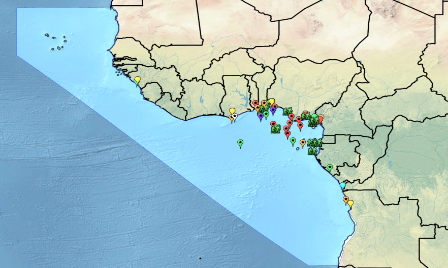 In support of the Yaoundé Process, the MDAT-GoG, the Franco-British mechanism created in 2016, provides a permanent and coherent picture of the maritime security situation in the waters of the Gulf of Guinea.

In particular, its role is to alert all actors of the maritime industry of events occurring in the voluntary reporting area.

Thus, thanks to the reporting of ships and its network of contacts established in the Gulf countries, the MDAT-GoG has become the reference in the collect and dissemination of information related to the security of ships operating in the Gulf of Guinea.

All the events are listed in the “weekly” and “monthly” reports which can be downloaded from the MDAT-GoG website (see “partners” tab).  But the MDAT-GoG also produces the “six-months”. This document has just been published and it includes all the events that took place between 1 January and 30 June 2020.

– The dispersion of acts in 2020 is much bigger: events occur in a coastal zone extending from Ghana to Angola, via Malabo, whereas in 2019 they were mainly focused on the approaches to the Niger Delta.